In Medieval times, when there was chivalry and tourneys between knights, there were men known as heralds. The herald’s job was to announce the various knights, and to do so he would describe the coat- or shield-of-arms. “Coat-of-arms” came about from having the shield-of-arms embroidered on one’s coat. The herald’s announcement was essential since the knight was wearing armor and not readily identified by the crowd. A herald would announce, to the crowd and royalty, a Hasbrouck knight as follows (in French, or course):

The components of the Hasbrouck Coat of Arms: 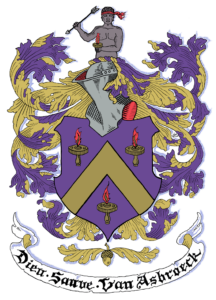 We do have a typical discrepancy with the facing of the helm (helmet) and the crest (the Moor). According to heraldic custom, they should face in the same direction. Ours today face in different directions- helm to dexter (right) and crest to front.

There is some question as to the appropriate facing of the helmet. Ours, facing dexter (to the right), has a closed visor. This is fine for the squire or gentlemen, but a knight would have his helmet face forward with visor open. The coat we use is most likely the coat-of-arms issued to the knights (chevaliers) of our family.

What do all the symbols on the family Coat of Arms mean?

This primary shield used by most of the family here in America was supposedly awarded by Charles V to the knights (chevaliers) of the family. Actually the so-called crusade in the mid 1300’s was more a battle by the French and English for influence with Spain. Charles V decided to do battle with the King of Castile (Pedro the Cruel). The English, too, were headed for the same battle to make it a three way conflict, but they got lost en route.

Charles V used mercenaries to disguise the event from appearing as an official French campaign. Anyone who asked awkward questions was told they were all going on a Crusade against the Moors of Granada. The Pope was thankful to be rid of the mercenary companies which had threatened his palace at Avignon. He gave them his blessing for the campaign in Spain and contributed to their wages.

Interested in more information about this event? Read the following book: Turnbull, Stephen, The Book of the Medieval Knight, Crown, NY, 1985, pages 70-75. 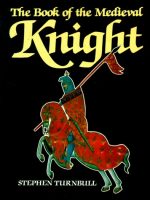 You can make online purchases of a number of items decorated with the Hasbrouck Coat of Arms.

Click on the HFA Store button to the right.

A percentage of each sale goes to the General Fund to continue the work of HFA.