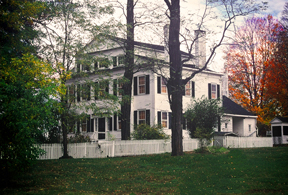 The Federal mansion known as Locust Lawn is located four miles south of New Paltz on Route 32 in the town of Gardiner. The house was built in 1814 by Col. Josiah Hasbrouck and owned by descendants of the family until it was given to the Huguenot Historical Society by Miss Annette Young in 1958. In October 2010, the property was transferred to Locust Grove in Poughkeepsie, with which it shares a history of common Hasbrouck-related ownership over many years.

Col. Josiah Hasbrouck, a great grandson of Jean the Patentee, was one of the wealthiest men in the county. His property holdings – inherited and acquired – were very extensive. He held numerous mortgages, and soon after the 1800s he and his son began to acquire large areas of land in the western section of New York State. The family had acquired a cultural appetite which demanded excellent furniture, good books, paintings, and European imports. His son’s family were all educated by private tutors brought to the house for that purpose.

Col. Josiah Hasbrouck was a Lieutenant in the Revolutionary War and received his commission as a Colonel for service in the Ulster County Militia. He served in the U.S. House of Representatives during the terms of Presidents Adams and Jefferson. During his stay in Washington, he saw many fine homes, both there and in Virginia. Therefore, he decided to build this large Federal-style house. The proportions of the building, its pilasters, arches, and wide moldings are characteristic of fine Federal architecture. Six pilasters which rise for two stories are on the front of the house, at each end of the center section and on either side of the doorway. There is a deep molding above the pilasters, a wide tablature above the molding, then another molding. The roof slopes from the outer edge of each wing toward a third floor center section, which had three windows on the front. There is a pilaster at each end of the center section and one between each window. The doorway has a sidelight on either side, each with a paneled blind. There is an arch above the doorway, and a sunburst oval directly above it. You would expect to see a fanlight in the arch over the doorway and lights in the sunburst at the top of the house, but both are filled with wood. Although the front of the house is smooth shiplap siding, the sides are finished with overlapping clapboard. The tall white chimneys rise from each side, and there is a one-story kitchen wing in back. The front door is a divided Dutch door. This may possibly be due to the influence of the first mistress of the house, Sarah Decker, a lady of Dutch descent.

In 1981 the interior of the house was completely researched and paint samples taken. The rooms were painted the same colors as were used in 1814.

The house was surrounded by a 1,000 acre farm, part of which still remains. It was productive since the days of the Evert Terwilliger family, who settled there and built the stone house (1728) still standing a short distance from the mansion. The many slaves who served in the family in years gone by and some of the Terwilligers are buried on a high hill across the Plattekill, east of the house.

The property incudes the old slaughter-house, wood-house, carriage house, and smoke-house. The slaughter-house is very interesting because of the fact that it still retains all the equipment that was used in such a building in 1814. There are areas for turkeys, chickens, ducks, and hogs to be placed before slaughtering. The ovens to heat the water, the great iron cauldron for scalding hogs are to be seen, as well as a pulley for hoisting a steer.

On the exterior of the building one will note the millstone once used in the Terwilliger mill, which was located near the bridge over the Plattekill.

The first floor includes 3 rooms in the main part of the house and 2 rooms in the wing. The kitchen had a huge fireplace somewhat like the one in the Old DuBois fort with its baking ovens.

One of the outstanding features of this house is the marbleized plaster walls in the hall. This treatment of plaster was a specialty of Cromwell, the architect. Col. Josiah Hasbrouck placed the date of the house on the wall to the right as you enter.

The room on the left of the hall was the parlor. The room to the right of the hall, now shown as a dining room, was originally a second parlor. There is also a schoolroom where the children were taught by private tutors. The rug was laid in 1850. A fine staircase ascends for three stories. On the second floor there are four bedrooms. A stairway goes to the third floor from this hall. At the south end, what is now known as the children’s room was partitioned off from the hall in later years. The third story of the house was given over to a great attic and servants’ quarters.

A fascinating history of Locust Lawn was researched and displayed in an exhibit and webpage in September 2019 by Susan Stessin-Cohn, Ashley Hurlburt Biagini. Enjoy the results of their research: The Story of Locust Lawn.