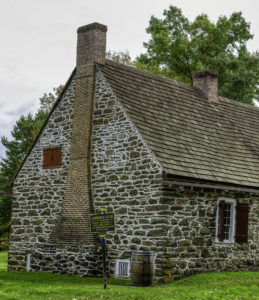 The Abraham Hasbrouck House is across the street from the Reformed Church. Until recent years it was believed that this house was built in three sections by Abraham the Patentee between 1692 and 1712. However, in 2002 dendrochronology (tree-ring dating) revealed to our great surprise that the center room was built about 1721, the north room about 1728, and the south room about 1734. Since Abraham died in 1717, that means he never saw the house, which was in fact built by his son Daniel. However, Abraham’s widow, Maria Deyo, did live there until her death in 1741. We don’t know for sure where Abraham lived; but it is logical to assume that it was in a simpler house (probably wood frame) on the same site. He would obviously have lived on his own property and most likely at or close to Huguenot Street where the present house stands. Since this house has been called the Abraham Hasbrouck House for more than a century, the name has been maintained but Daniel’s name added in brackets behind his father’s for formal identification.

The Abraham Hasbrouck House is an excellent example for a student of architecture to see how a house of that era was enlarged. One can see the divisions on the exterior walls. There is a variance in the levels of rooms on the ground floor, which is a feature of many old stone houses. It was easier to build split-level than to grade. Maria probably lived in the higher north room, which is presently presented as the “opkamer” (Dutch for up-room). Such rooms were often used as a private living space/bedchamber, and the room features a period canopy bed and a 17th-century Dutch kaas, which was probably made in Holland and brought over by one of the original families. A kaas was used as a wardrobe cabinet as well as for storage of linens and blankets. The great chestnut beams used in this room as well as in the kitchen were turned sideward in order to obtain more headroom. This is the only example of this feature on Huguenot Street.

The cellar was originally the kitchen and slave quarters, and there was no direct access to the upper rooms. The present kitchen was built along with the north room, which is directly above it. The current steps to the center room were added much later, and the only access was through the present door in the east wall. Although the kitchen is now almost entirely below ground, the ground level in the 18th century was about three feet lower than today, so it was originally that much higher. The north chimney, connected to the kitchen fireplace,is original. This great fireplace served not only for warmth but was also used for all the cooking done by the family and slaves. In addition, this cellar kitchen was reportedly used as a gathering place for the young men of the village for cockfights and other forms of entertainment.

One of the architectural glories of the house is the restored “jambless” fireplace in the center “room of seven doors.” It has no sides or mantel. The great beehive chimney rests directly on the huge beams. (A similar fireplace in the south room is also a restoration.) The hearth tiles were reproduced, using an original one as an example for period and composition. Also of interest in the center room is a reproduction of a Dutch box bed. This type of bed was either of a permanent nature or could be movable. The bed was generally placed in an area where the warmth of the fireplace would be available and the area underneath it formed a storage area. At night the doors would be closed. One has to realize in looking at a bed of that period that people were shorter in stature than they are today. There is also a scale model of the house (with a removable roof to see inside) built by Helene Hasbrouck Anderson’s husband, Roy. The couple carried it around the country to provide a vivid impression of the house in visits to family members and meetings of historical organizations.

When Daniel married Wyntje Deyo in 1734, he added the south room, anticipating a growing family. (They subsequently had nine children.) This room shows a transitional period. The family had found that the ceiling should be higher, and there was no longer any need to use such large beams. The flooring, woodwork and beams are original. The only change made was enlargement of the windows. This room has several exits. One leads to a small stairway; another used to lead to a stairway to the cellar. The room is presently displayed with a group of period furnishings.

The house was owned by Abraham’s descendants until 1911. In 1957 the property was purchased from the Evers family by the Reformed Church. In 1961 the house and some adjoining land was purchased from the Church by the Hasbrouck Family Association and placed under the ownership of the Huguenot Historical Society.

Read about our historic preservation and presentation of this home. Click here