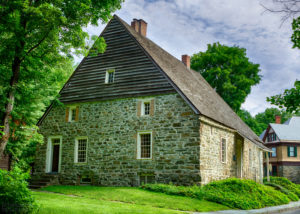 The Jean Hasbrouck House stands at the junction of Huguenot Street and Front Street. It was the first of the stone houses on Huguenot Street to be acquired (in 1899) by the 5-year-old Huguenot Patriotic, Historical and Memorial Society of New Paltz (now the Huguenot Historical Society), which called it the “Memorial House” and used it as a museum of the history of the Huguenot settlement of New Paltz. Information passed down for generations gave the construction period as 1694-1712, but in 2002 dendrochronology (tree-ring dating) revealed that the beams for the house were cut in 1721.

Since Jean died in 1714, this surprising revelation indicated that he had never lived in the house, which must have been built by his son Jacob. However, Jean apparently did have some connection with the house. An oak fireplace lintel was dated to 1677 (the year of the New Paltz patent), and other evidence indicated that portions of the south and west walls were part of Jean’s earlier dwelling on the site. Since the house has been called the Jean Hasbrouck House for well over a century, the name has been retained but Jacob’s name added in brackets behind his father’s for formal identification.

The house is an outstanding example of Dutch stone house architecture. The long center beam, the enormous loft where grain was kept, and the huge beehive chimney of imported brick are architecturally unique. It is the most prominent stone house on Huguenot Street and reflects the economic and class standing of its builder, who operated a prosperous farm and had other land holdings as well.

Since New Paltz was about 15 miles from the retail markets of Kingston, there was a need for a local store, and one was established in the house some time in the mid-1700s. It operated there until 1811, when it was moved to the emerging commercial district on Main Street.

The house remained under the ownership of Jean’s descendants until 1886, but from 1822 it was rented to a succession of tenants. In 1886 it was sold to Jesse Elting, who rented it to a tenant family until selling it to what is now the Huguenot Historical Society in 1899.

In recent years the east wall bulged outward dangerously and had to be torn down and rebuilt, stone by stone. This meticulously accurate project was completed in 2007 at a cost of $500,000 – the most demanding and expensive restoration in the history of Huguenot Street. Now reflecting an impressive interior restoration as well, the house is open again for tours and provides a fascinating window on life in the 1760’s.

Read about our historic preservation and presentation of this home. Click here