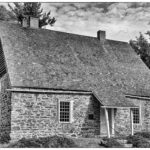 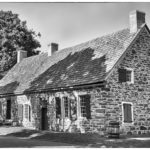 Origins of names: Family names evolved first in China, but later the practice came to Europe – sometime in the Dark Ages. Names first went to the nobility, who were the feudal lords over their domains. The nobleman and his family became known as ‘so-‘n-so from such-‘n-such place’. Over time, the title stuck as a family name.

Artisans soon began incorporating their occupations into their family names and had their shields emblazoned with symbols of their professions. The lozenge (diamond shape), for example, represents a spindle and was likely initiated by a weaver. Examples: Wagner – cartwright, Bauer – farmer. Some families gained their names from significant events or traits they were associated with. Examples: Krause – curly haired, Braun – brown hair.

Hasbrouck name origins: Our name came from a location, near the Ville d’Hazebrouck in Flanders (near Calais), France. Following is an excerpt from a letter written by Major John E. Hasbrouck to an unnamed “Judge” on September 16, 1928: “The name Hasbrouck (Hasebreucq or Hazebroucq) is descriptive and has meaning of “The March of Hares.” This designation was given to the country south of Cassel in Artois by St. Eloi, Bishop of Noyon, who in the reign of Dagobert III (711-715 A.D.) converted that country to Christianity.” Saint Eloi described the inhabitants of the principal settlement (the present town of Hazebrouck) just south of Cassel and speaks of the “ruling family” in this settlement whom he denotes as de la Haesbreucq. Hazebrouck acknowledged the Saint’s participation in its history by naming the principal church after him.

Has: There are a lot of names in Europe that refer, in some way, to the hare (a long eared rabbit) and are spelled with some variation of Has, Haz, Haes – and so on. The hare has significant importance throughout Europe (from Frankish Empire times), and images of hares in fighting stance or other positions emblazon many different families’ shields, including a Utrecht, Holland branch of Hasbroeck. That Has does mean hare is credible. We’ve all heard of hasenpfeffer, which is a highly seasoned rabbit stew.

Brouck: The second part of the name, in all spelling or national backgrounds, is tied to a brook, stream or marsh. The English and Hebrew languages have Brouck, referring to a dweller near a stream or marsh land. From this we should consider that Hasbrouck likely means marsh hares or hares that dwell in the marsh or by the stream. Probably, Major John Hasbrouck and others inadvertently used “march” for “Marsh.” They sound the same, and over time one could have become the other, or a foreigner may have heard it wrong.

Van or Von: Flanders was a part of the Spanish empire for a long time. Therefore, the name originated with the de la prefix and this truncated to d’ or de. Then, Flemish influence changed the prefix to Van or Von. All these prefixes mean ‘of’ or ‘from’ and soon became significant as the way nobility expressed their names. Even today, the European branches still apply Von and Van; and if they could be found, the Spanish branch probably still prefix with de or d’.

Jean and Abraham: The America-bound emigres dropped the prefix, probably to hide who they were. That subterfuge is described below. Between Europe and the US, many spellings of the names exist: Hasebroock, Hazbrouck, Hazebrouck, Von Asbroeck, del Hazebrouck, Hazebroucq, Assbroecq, Assebrouck, Hasbrouck, Heasbreucq, d’Hazebrouck, Hassebrauk, Hasebreucq, Van Hazebrouck and Hasbrook. Some spell it with a capital B in the middle.

French versus Flemish spelling: Many variations delete the ‘H’ and spell the name with ‘As’ (see the motto on our coat of arms – “Dieu Sauve Van Asbroeck”). This reflects the Flemish source of the name. (The French words for hare and marsh are quite different.) The Calais — Hazebrouck area is on the language border between French and Flemish, and even today some towns just a few miles to the north are Flemish-speaking. Other variations in spelling may be due to elements of the family migrating to different regions and adapting to the spelling conventions of their new home lands.

Prefix drop subterfuge: When the Huguenots arrived in upstate New York. For some time they held the possibility that the French might come again and take possession of the area. The Hasbrouck brothers, Abraham and Jean, began by signing their name as Broecq or Brouck and Assbroeck and then Hasebrouck. You can tell how they became more comfortable with their position and less afraid of the French coming back.

Why the subterfuge?: These Hasbroucks had dropped Catholicism and became Huguenots (Calvinists). They became known as Walloons or Reformists. In the very Catholic France and most of the rest of Europe, this was dangerous to life and limb. The family Bibles in America didn’t even list the parents who were still back in the old country, likely around Mannheim, Germany. The brothers feared that if they were captured there in New York, there would be repercussions to the family back home.

Hazebrouck, France: Backing up a minute to the origin of the Ville de Hazebrouck, there is an interesting piece of information concerning those times. The letter above states that St. Eloi created the town because it had been converted to Christianity. This may have been a bit of an excuse. It seems that knighthood came into its own around the early 700’s. In France they were called chevaliers. In 732, France under Charles Martel turned away the Moslems in Poitiers. Charles Martel had recognized the new-found benefits of knights in battle and used them in Poitiers. He undertook the creation of an army of them. There were candidates aplenty, but they were too expensive to maintain. He came up with the feudal concept to put these people under liege to him. He made the Church give up lands and turn them over to the knights. The knights were then free to run the estates and earn their living from them so long as they remained on call to battle. It is interesting to note that the Ville de Hazebrouck came into existence about this time, was presented by a Church Bishop, and we had some chevaliers in the family.